He is voiced by Matthew Mercer in English and by Michiko Neya in Japanese.

He was first seen in "Double Crossed", where he felt Eurus coming close to the portal and then started the council by talking about his actions of disturbing the balance of Tenkai Energy.

In "A New Knight", he helped the Knights defeat Vilius.

He was captured by Vilius in "Vilius Returns" and was a part of his new scheme.

Zephyrus and the other Guardians.

Zephyrus going to summon the barrier for the portal.

Zephyrus and the other Guardians in a conference.

Zephyrus alongside the other Guardians in Vilius' throne room 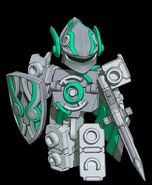