Vilius Tenkai Dark Tempest (Japanese: ネオ・ヴィリウス, Neo Viriusu, Eng. Translated: Neo Vilius, Korean: 네오 비리우스, Neo Biriuseu, Hebrew: ויליוס) was the main antagonist of Tenkai Knights. He was originally part of the Knights, but wanted to be the best, so he became corrupted with evil and turned on them. He then infused Corekai men with his corrupted energy, hence the name Corrupted. He also had control of the Guardians and used their powers to try and defeat the Tenkai Knights.

He is voiced by Crispin Freeman in English. He was voiced by Yōsuke Akimoto in Japanese from "Two Worlds" to "A New Knight", but is now currently voiced by Nobuo Tobita.

Villius tends to be highly demanding, but also very determined. He wants to win in his war with the Tenkai Knights, so he knows that in the worst case was that he must always have another trick up his sleeves. But instead of doing what he wants by himself, he tells his servants to destroy the Tenkai Knights for him.

Vilius was once a Tenkai Knight, but his lust for power and desire to be better than the others made his Tenkai Energy corrupted, and he turned against his former comrades. From then, he leads the Corrupted army to obtain Tenkai Energy and find Dragon Cubes in order to awake the Tenkai Dragon.

Once the Dragon was awakened, it went on a rampage. In the end, the Knights Bravenwolf, Tributon, Valorn, and Lydendor stopped the dragon, but Vilius escaped. Many years later Vilius set out to collect the Dragon Cubes in order to revive the Dragon again, this time under his control.

In "Vilius Revealed", Vilius notes the Tenkai Knights growing confidence after having gained another cube. He then decides to take action and make his presence felt. Despite his advantage, he retreated from the battle once the Corekai stepped in to defend the Knights.

In "Dragon's Key", Vilius sent his forces out under the command of Slyger and Granox to attack Commander Beag's forces, until Dromus was ready with his invention which would capture and contain the soon to be revived dragon.

In "Vilius Unleashed", following the awakening the Tenkai Dragon, and its capture, Vilius and Bravenwolf face each other in a duel. During the battle, Bravenwolf reveals his human identity to Vilius before he's destroyed. In the aftermath, Vilius revives and now plans to conquer Earth after taking Quarton.

In "Checkmate", he reaches the Guardians Sanctuary. Suspiciously, Guardian Eurus was not there.

In "Dragon Key Quest", Slyger tells him to attack the other two Guardians, since they are standing on the portal. As he commands his troops to come in closer, Zephyrus places a barrier, showing to Vilius the location of the portal. Villius uses his trident to break the barrier, but Boreas uses a move to prevent it from exploding.

In "The Dark Unlock", he attacks Dromus to get the Black Dragon Key and used it to unlock the Dark Tenkai Dragon.

In "Vilius Returns", the Guardians decide about reviving Vilius to punish him for his actions. As they were bringing him back, his spirit controls Zephyrus and uses him to gain extra energy once he would recover. He uses the energy to overthrow the Guardians and gain control of the portal. When the Knights attempt to stop him, he drains their energy to use to bring back the Tenkai Dragon, but it ended up being split into black and white Dragon Cubes by Dromus. Vilius absorbes the black cubes, giving him a new look. Back at the portal, he commands Granox to attack the Knights and sends Slyger to Earth.

In "No "I" in Team", Vilius sends Slyger to help Granox at the excavation point.

In "Corrupted Earth", Vilius uses the portal to send Granox to Earth to destroy the Knights.

After Slyger's failure in "Fortress Revealed", he decides to take out the Knights himself.

Vilius Resurrected by the Guardians 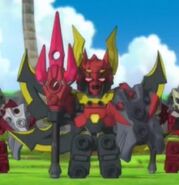 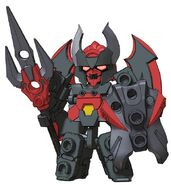