Tenkai Rogue
Venetta (Japanese: ヴェネッタ, Venetta, Korean: 베네타, Beneta) was at first a major antagonist, but later became a protagonist in Tenkai Knights. She originally was an evil Tenkai Knight, owned by Beni, who was working with Gen, then was working with Vilius. Now she is with the rest of the Knights. Her armor animal is a spider and she is also the first female Quartonian.

Venetta's armor is pink in color with purple highlights and green acessories within the highlights. Her armor is based off of a spider and on her forehead is some sort of crown-like attachment. She also has a shield on her back that is shaped like a spider. Venetta uses twin daggers as her weapons, and is able to combine them to unleash a Dark Energy Blast

Her personality is based on Beni's

it is hinted throuout the season that Beni may have a crush on Gruen. She says things like "your not like other boys" and in the send of season one "my big strong Bravenwolf"

Venetta used to be Vilius's allie as stated in "Beware Betrayal." But it turned out she didn't want to be part of the corrupted and in "Lone Wolf" She joined the Tenkai Knights. For as now she is Vilius nemesis.

Along with being quick and agile, Venetta is also able to shoot purple webs to entangle her enemies and the ability to combine her twin daggers to form a staff. She seems to be able to use the shield she carries around as a Dark Energy Blaster, that fires blasts from the spider like mouth end of the shield. It is not yet known if she can use Titan Mode. 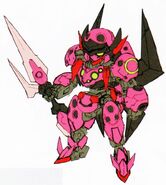 picture of venetta in titan mode. 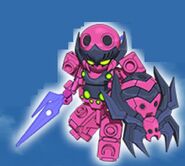