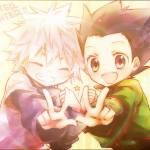 aka Mariel and Meari

I'm Anime G and WE(when I mean we I mean we're twins.)LOVE Tenkai Knights and I'll try to help as much as posible.We also love anime:-)  :-)  :-) .We will try to edit anything since we have ALOT of homework and have TaeKwonDo but we will try!But we can help with any questions for fanfics or ideas. And we actually do shipping!! ((Even Yaoi, as seen as my profile pic. My sun child.... ;-; ((lol, my shipping-ness is showing, ahah.))

No Game No Life

Okami-san and Her Seven Companions

~People who respect other people

What I REALLY HATE ((I emphasized it))

~People who only want stuff for them selves

((AND MOST OF ALL))~ People who say lies and spread rumours.

Retrieved from "https://tenkai-knights.fandom.com/wiki/User:Anime_G?oldid=68725"
Community content is available under CC-BY-SA unless otherwise noted.