Toxsa Dalton (Japanese: 亀山トクサ, Kameyama Tokusa, Tokusa Kameyama, Korean: 두기, Dugi, Hebrew: טוקסה דלטון) is one of the main protagonists of Tenkai Knights. He owns the core of Valorn, one of the legendary Tenkai Knights. However, ever since he unlocked Elemental Mode, he goes by the name Valorn Tenkai Terrablast.

He is voiced by Ben Diskin in English and by Maki Mizuma in Japanese.

Toxsa is 12 years old, has green hair and hazel eyes. On his head, he wears a black headband with a yellow lightning bolt on it. Also, he wears a sleeveless green shirt with a grey cracked skull on it along with a black vest with orange color on the inside. Furthermore, he wears dark green tights and white boots.

Though he's a year younger than the others, he is at least as smart as them and thus in the same grade. Toxsa is something of a tech geek. He enjoys playing video games and tinkering with digital equipment when not helping out at his family's diner. He is quirky, short-tempered and is more comfortable with computers than with people. He also is a little bit funny, tough, and sometimes he'll say jokes.

While still good friends, they sometimes get competitive with each other, such as trying to eat spicy foods to achieve their Titan Mode.

Toxsa's older sister. Who often worries about him at time, but stops worrying so much when she learns he's a Tenkai Knight.

In "Two Worlds", Toxsa is shortly seen while running across the schoolyard, however his appearance in that episode is more of a cameo than of a character, who actively plays a role in the plot. He also appears in "Tenkai Dragon Cube" in his Tenkai Knight Form.

In "The Rising Fire", he appears together with Chooki and doesn't want to work together with Guren and Ceylan, but later they changes his opinion.

In "Chooki's Mojo", during a battle with Granox and his new Jinx Cannon, Toxsa is almost hit by the weapon, until Chooki steps in the way to take the hit in order to save him. Chooki became clumsy and unable to do just about anything, believing himself responsible. Toxsa bought a toy charm from one of Mr. Whites candy machines and offered it to Chooki, claiming it to be a precious family heirloom that brings it's holder good fortune. When he traveled back to Quarton with the others, Chooki was able to overcome the jinx thanks to Toxsa's encouragement and unlocked his Titan Mode in the process.

Later in "Toxsa 2.0", Toxsa began to grow jealous of his teammates all being able to achieve Titan Mode, Toxsa secretly traveled to Quarton to train. Meanwhile, Granox and Rho attacked and captured Toxsa in an attempt to learn of the Dragon Cubes location. Toxsa prevented this by forcing Granox mind reading device to scan his mind instead of the Valorn A.I.'s memory. When the other Tenkai Knights arrived to save him, Toxsa realized he needed his friends and transformed into Titan Mode, and forces Vilius' forces to retreat.

In the aftermath, Toxsa and the others try to figure out their next move.

In "Tenkai Rogue", Toxsa was present when the new Tenkai Knight Venetta revealed herself to them and challenged Bravenwolf.

When Toxsa meets Beni for the first time in "The Key to Evil", he's upset that Guren didn't tell him and the others about her. 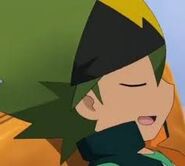 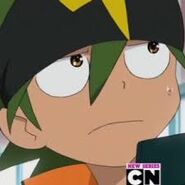 Me, in love with Chooki? Please.