Slyger (Japanese: スライガー, Suraiga, Sliger, Korean: 슬라이거, Seullaigeo, Hebrew: סלייגר) is an antagonist in Tenkai Knights. He is one of Vilius' top Corrupted Soldiers. His armor animal is a panther.

He is voiced by Crispin Freeman in English and by Atsushi Imaruoka in Japanese.

Slyger is armed with two energy bolt firing claws, lacking a shield that most other Tenkai carry. His purple armor's complemented with a yellowish green visor that covers his 4 glowing green eyes.

In Slyger's Earth form, he wears a black coat and fedora with sunglasses. He's an android on Earth (with his notable 4 eyes and torso piece), and was living in Beni's warehouse until the Knights sent him back to Quarton using their Portal Weapon.

Slyger's sneaky and cunning, but he's conceited and cowardly as well. He fears Vilius and is jealous that Vilius liked Dromus better than him, in "Too Close to home", he seems to be feared when Bravenwolf attacked and defeated him very vigorously as well as the Tenkai Knights overpowering him and Granox when the knights were freed from their trap. He's shown to become quite jealous and angry when someone does something better than him, such as when the Tenkai Knights perform Titan Fusion after he does. He often tries to impress Vilius to get his approval, and will follow Vilius blindly, out of either loyalty or ignorance both traits he has shown signs off. He's also very competitive with Granox, often asking how much he messed up Vilius's plan.

Slyger wishes to please Vilius, no matter how many times it gets him blasted into bits to do so. It appears that Granox's his partner as he performs most of his missions with him. He's often referred to as "ToasterFace" by the Tenkai Knights and is eager to get revenge on them. He also makes very rash decisions as shown many times battling the Knights, such as when he volunteered to get blasted with energy from the Tenkai Dragon and when he agreed to attack the Guardians with Vilius.

In "Vilius Returns", Vilius gave him the task to travel to Earth and destroy the Knights. At the end, Slyger's shown in his Earth form hiding in the mall looking at Mr. White's shop. His android form can also scan and replicate objects. He was sent back to Quarton by the Portal Weapon by the Knights and then forced to retreat after they used their elemental powers. He sometimes goes to earth to crush the knights but always fails. He likes to use the Sky Griffin like in "Tributon Extreme " and titanfusing with it in "Extreme Titan" and using its elemental form The Fire Raptor. 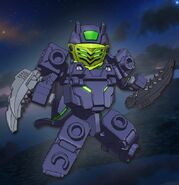 Add a photo to this gallery

Retrieved from "https://tenkai-knights.fandom.com/wiki/Slyger?oldid=91839"
Community content is available under CC-BY-SA unless otherwise noted.