Orangor (Japanese: ウッキッキー, Ukkikkī, Korean: 우낏끼, Ukkiskki, Hebrew: אורנג'ר) is a supporting character in Tenkai Knights. He first appeared in "Welcome to the Jungle". His armor animal represents a monkey.

He is voiced by Ben Diskin in English and is Misaki Kuno in Japanese.

His main form is a cartoonish orangutan.

Wacky, wild, and all around fun, hard to understand sometimes, but other than that he has a similar personality to discord, he just wasn't evil, then reformed and is not a lord of chaos (look up the picture of discord of you don't know who we're talking about), and his funniest moments are coming out of nowhere scaring the life out of the Knights and Beag.

Scorpidon is Orangor's king and is very loyal to him, and they play games with the Knights. They might even be best friends and Orangor will not let his master down.

Orangor in his ball form

Beni is turned into stone.

Beni's stone hand was still around the flag on his head, 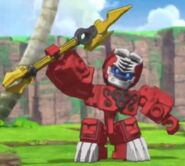 orango giving bravenwolf emblem
Add a photo to this gallery

Retrieved from "https://tenkai-knights.fandom.com/wiki/Orangor?oldid=74533"
Community content is available under CC-BY-SA unless otherwise noted.