None
Guardian Notus (Japanese: ガーデイアン・ゼピユロス, Gādeian Zepiyurosu, Eng. Translated: Guardian Zephyrus, Korean: 가디언 제피로스, Gadieon Jepiroseu, Hebrew: זֶפירוּס) is one of the four Guardians of the portal to Quarton and Earth in Mr. White's shop and the Guardians Sanctuary, as shown in "Tenkai Knights: Origins".

He is voiced by Ben Diskin in English and by Junichi Yanagida in Japanese.

He was first seen in "Double Crossed", where he reminded Eurus that the Guardians can't interfere with problems in Quarton or Earth, unless its an emergency.

In "A New Knight", he helped the Knights defeat Vilius. He was captured by Vilius in "Vilius Returns" and was a part of Vilius's new scheme.

Notus and the other Guardians.

Notus and the other Guardians explaining Tenkai Energy to Vilius.

Notus and the other Guardians in a conference. 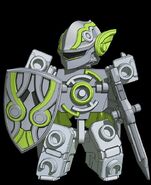