Lydendor Tenkai Lightningstrike (Japanese: サンダー・ライデンドール, Sandā Raidendōru, Eng. Translated: Thunder Lydendor, Korean: 썬더 라이덴드르, Thunder Lydendor, Hebrew: ליידנדור) is one of the legendary Tenkai Knights. He is owned by Chooki, and first appeared in "Tenkai Dragon Cube". His armor animal is a wasp, he is the Tenkai Knight of agility, and has elemental lightning powers. He has a shield in the shape of a big shuriken.

Lydendor's colors are yellow and black, which resemble the outfit of his owner. His armor represents a wasp. He uses a chainsaber and a shield blade. His wings glow yellow and his eyes glow green with wasp eye appearance.

Lydendor becomes twice his original size. He has armored legs and arms, as well as a bigger head and a wasp chestplate. He holds a giant Tenkai chainsaber and a shield blade.

Black parts turn gold. Faster with enchanced abilities and more gold with yellow parts into it.

Lydendor's Elemental Titan Mode is a bit larger than his original Titan Mode. He has armored legs and arms, as well as a bigger head and a wasp chestplate. He also holds a giant shield blade.

Lydendor is a quick thinker and a strategist, much like the original Lydendor. He tries to be confident most of the time, and knows that the battle with Vilius is more important than his life. He likes to know what is going on and hates being tricked, especially by Dromus or Vilius.  He tries not to show fear, even when they are hopelessly outnumbered. Also, he hates being unable to succeed in something and will do everything he can to learn.

Both are considered as fine smart knights.

He is closest to Valorn.

Gets along well with Beag.

Guardian Boreas: Gets along with him.

Corrupted Boreas: Never got along with him due to Vilius corrputing him.

Guardian Eurus: Gets along with him.

Corrupted Eurus: Never got along with him due to Vilius corrputing him.

Guardian Zephyrus: Gets along with him.

Corrupted Zephyryus: Never got along with him due to Vilius corrputing him.

Guardian Notus: Gets along with him.

Corrupted Notus: Never got along with him due to Vilius corrputing him.

Formerly enemies now he considers her as a friend.

Lydendor uses his agility to his advantage, and can quickly come up with a strategy, even in the middle of a battle. He is a natural at using his Chainsaber and Shield Blade and can defeat many enemies at once. As shown in "Checkmate", he hates being tricked. He will also do anything he can to protect his friends. He will keep fighting until he is defeated, as shown in "The Key to Evil" when he was fighting his evil clone. He seems to become angrier and more determined to win when he thinks of Vilius or Dromus destroying innocent people on Earth or Corekai on Quarton. He is often okay standing on the sidelines (or going as bait), fighting and protecting innocents while the other Knights regroup and even the playing field, such as when Tributon and Bravenwolf perform Titan Fusion in "The Key to Evil". Most times, however, he likes to get into the main fight.

Lydendor and the other Knights. 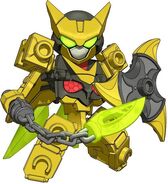