Dromus Tenkai Whirlwind (Japanese: 疾風黒騎士, Shippu no Kurokishi, Eng. Translated: Gale Black Knight, Korean:질풍 흑기사, Jilpung Heukgisa) is a main character in Tenkai Knights. He formerly was an evil Tenkai Knight, owned by Gen. He is a doppleganger of Bravenwolf Tenkai Firestorm. Like Bravenwolf, he too describes himself as the Tenkai Knight of Power, but unlike Bravenwolf, he does not have elemental fire powers, but elemental wind powers instead.

His appearance is very similar to Bravenwolf's, but instead of white and red armor, his armour is grey and black, and his eyes are red instead of green. Also, his "wolf" in his chest has a scar on the left eye, unlike Bravenwolf's.

Almost like Bravenwolf, except that his armor parts are grey and black and he has a scar on the left eye of his wolf plate, just like he does in regular form.

His Phoenix mode is basically like the other Knights, except his gray parts become gold and his eyes change from red to green.

His elemental name is Dromus Tenkai Whirlwind. His first appearence in Elemental Mode was in "Red & Black".  He is like Bravenwolf Tenkai Firestorm, except his eyes are blue and no longer has a scar on his wolf chestplate. His wings are black and cerulean.

He unlocked it in the episode "A New Element." Basically like Bravenwolf's Elemental Titan Mode, except his eyes are blue and his wolf chestplate eyes are blue.

Both Dromus and Gen seem very shady. Dromus specifically is creepy, and Gen being the secret agent of Villius triggered Dromus to seem strange to the Knight's because of his secrets. Though once the regular Villius was destroyed, Gen revealed his secret identity and joined the knights as Dromus. Dromus is considered to be the evil counterpart of Bravenwolf. Dromus then slighty changed his personality in "A new knight" He also changed his personality more better in "A New element"

Dromus and Venetta have been companions until "A New Knight" where Dromus turned good. After then they were split apart until Venetta starts turning good with being in the jungle and all.

Dromus first appeared at the end of "Two Worlds". He appeared again in "Tributon Extreme" and stole a Dragon Cube. His reappearance was in "Valley of Secrets". Dromus gets his elemental attack in "Red & Black" and then gets Elemental Titan Mode in "A New Element". Some times in " A New Element " Dromus will sometimes have aqua green eyes and sometime he will have blue eyes. Inludintg his scar on his wolf chesplate. 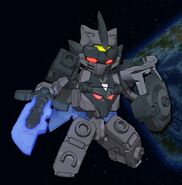 dromus now apart of the knights