Blue
Ceylan Jones (Japanese: 鷲崎セイラン, Washizaki Seiran, Seiran Washizaki, Korean: 세이란, Ceylan, Hebrew: סיילן ג'ונס) is one of the main protagonists of Tenkai Knights. He posesses the core of Tributon, one of the legendary Tenkai Knights. However, ever since he unlocked Elemental Mode, he goes by the name Tributon Tenkai Iceblast.

He is voiced by Todd Haberkorn in English and by Akemi Kanda in Japanese.

Ceylan is 13 years old, has blue hair and blue eyes. He wears a white hooded sweatshirt with a blue denim jacket with a picture of two gold wings on the back over it and blue pants. He also wears brown boots and has green goggles on his head.

He is friendly, goofy, outgoing and a big practical joker. When not goofing off, however, Ceylan can be surprisingly cautious. He is also a huge fan of lime parfait, as he often asks for it in Toxsa's diner. He has been shown to have self-doubt at times and has a somewhat short temper. He is also very defensive of being insulted.

Ceylan is best friends with Guren. Although he can sometimes find him awkward, they are still friendly towards each other. As well as the other knights, Guren wants to keep the team together (despite, Ceylan first wanted to quit the team).

While still good friends, Toxsa and Ceylan seem to compete with each other to certain extents, such as their competition to go Titan Mode. Toxsa and Ceylan argue sometimes with Toxsa bragging about doomsploder and Ceylan calling him Microcip but still work together to beat the corrupted.

They are good friends but Ceylan is sometimes jealous of Chooki's skills. He often complains when Chooki makes a perfect score in sports like basketball or football. They can still work together well.

At first, Ceylan finds Beni annoying and sometimes make fun of her with some jokes. However, it is all settled in the final episode, even though Ceylan said that Beni is still quite annoying in good terms.

Ceylan behaves good with his father as shown in " Power of four " when he said hi to his dad and greeted him nicely and when he found out they were moving away he didn't argue or anything until in the end of the episode Ceylan didn't move at all. In " Corrupted earth " Ceylan's mom was shown with his dad and it probraly states that Ceylan is a good son to both of them.

In " Corrupted earth " Mrs. Jones and Ceylan don't really have a talk recently in the show a lot by the episode it may state that Ceylan is a great son to both of his parents.

Finds him weird sometimes but are great allies.

Ceylan and Kiro have a special bond after Kiro takes Ceylan's corebrick and then Ceylan confronts her, that he loves his corebrick just as much she she loves sandy so Kiro gives Ceylan his corebrick again and they become good friends.

Ceylan and Boreas are great allies and when the knights need help, Boreas is there to advice them or tell them what happened in the past according to tenkai legend.

When he meets Guren for the first time he throws a paper airplane at his head. He's then chosen by Ms. Finwick to be Guren's guide during his first day. After school, they visit the Shop of Wonders, run by a man named Mr. White. He is drawn to the blue brick, but can't make it transform into a robot like Guren did with his. That night, he had a dream about being a robot, where he fought another robot. The next day, he's shocked to hear Guren had a similar dream. Together, he and Guren go back to Mr. White's shop to learn more about their bricks, only to be transported to Quarton instead. Unlike Guren, who was able to use his powers immediately, Ceylan was trapped in a cube-like form until Guren found him. Two Worlds

Shortly after Ceylan worked with Guren to try and track down the other two Tenkai Knights, they eventually meet Chooki and Toxsa. Their friendship gets off to a bumpy start, but in the end, they all agree on working together to achieve victory after finding the third Dragon Cube. Tenkai Dragon Cube

Ceylan and the rest of the boys are starting come together as a team when Ceylan learns from his father that he may be moving away. When Ceylan finally reveals this to the others they unlock the ability to combine their Tenkai Cores, and worked together to form the Protojet. The Power of Four

Ceylan watched as Guren unlocked his Titan Mode transformation for the first time. The Tenkai Kid

Ceylan and Guren met a mysterious new student by the name of Gen. Back on Quarton, Tributon fought off the Corrupted and achieved Tenkai Titan mode in order to save the other Knights when they were captured and injured. Tributon Extreme

Ceylan and Toxsa stood guard over the Dragon's Nest, while Guren and Chooki tried to find clues to the location of the White Dragon Key. Ceylan and Toxsa were eventually forced to go Titan Mode in order to hold the nest. Ceylan was able to hold the Corrupted off, but he and Valorn were soon overrun. Dragon's Key

Ceylan and Toxsa were still fighting to hold the Dragon's Nest, when Guren and Chooki arrived with Boreas and combine the Dragon Cube's and awaken the Tenkai Dragon. Later, Ceylan watches helplessly as Dromus captures the Dragon and transports it to Vilius base. He then watches as Guren defeats Vilius. Vilius Unleashed

Ceylan starts suffering from self-doubt when Guren absent-mindedly asks him why they were chosen to be the new Tenkai Knights. Guren's question leads Ceylan to wonder what skills he brings to the team. When he goes to Quarton to ask Beag what he brings to the team, Beag misinterprets the question and the pair are attacked by Slyger and Granox. When Ceylan attempts to fight the pair alone he is overwhelmed by their new Titan Mode transformations. After this, Ceylan is convinced that the other boys would be better off without him and quits the team. When they are summoned to Quarton, Ceylan at first refuses to go, but upon seeing a vision of the others in danger, rushes off to help. When he arrived, he helped the others defeat Slyger and Granox, his faith in himself restored. Oh No, I Didn't

After Beni tricked the boys and sent them to Quarton, Ceylan met Guardian Eurus. He then fought against a clone of himself created by Eurus. When it appeared they were going to lose against their doubles, Ceylan and Guren unlocked Titan Fusion, then he and Bravenwolf transformed and destroyed the clones. The Key to Evil 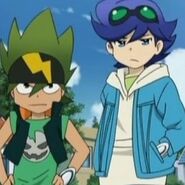