Guardian Boreas (Japanese: ガーデイアン・ボレアース, Gādeian Boreāsu, Korean: 가디언 보레아스, Gadieon Boreaseu, Hebrew: בוריס) is one of the four Guardians of the portal to Quarton and Earth in Mr. White's shop and the Guardians Sanctuary, as shown in "Tenkai Knights: Origins". He is voiced by Steven J. Blum in English and by Shigenori Soya in Japanese.

Boreas called out to Guren when he and his father first moved to Benham City. He later allowed Guren to see him in order to guide him and Ceylan to Mr. White's shop, where they were given the Bravenwolf and Tributon cores.

Once all four boys are gathered, Boreas explains the full history of Quarton to them, including the origins and later fall of Vilius.

When Guren and Chooki found the White Dragon Key, Boreas used the dimensional transport devices' special ability to transport it to Quarton. Later Boreas met with his fellow Guardians to discuss both his actions regarding the new Tenkai Knights, and Guardian Eurus's actions.

In "A New Knight", he helped the Knights defeat Vilius.

He was captured by Vilius in "Vilius Returns" and was a part of Vilius' scheme.

They refer to each other as "old friends,' it is unknown how old or where they met each other.

Boreas and the other Guardians talikng about Tenkai Energy to Vilius.

Boreas and the other Guardians.

Boreas and the other Guardians in a conference. 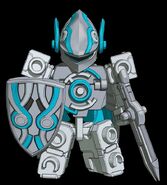