He is voiced by Kyle Hebert in English and by Chafurin in Japanese.

Has a stereotypical medieval Knight accent. Always optimistic, always there to support the Knights, even when they act foolish.

Beag is often confused by the earthly references the young Tenkai Knights make due to him not knowing they aren't the original Tenkai Knights. He seems to have a case of hero worship, but is very intelligent.

In "Valley of Secrets", Beag and two of his men once joined the Tenkai Knights in Robofusion, granting them the ability to use both the Protojet and the Air Lancer Jet at the same time.

Beag was later attacked while investigating the attack by the mysterious new Tenkai Knight, Venetta. He survived the encounter but was unable to help the Tenkai Knights defeat her.

Later, Beag tried to cheer up a depressed Tributon by singing a song that was dedicated to the brave Knight, even though he didn't like it.

if you look in the way back behind bravenwolf TFS you'll see beag.

beag is in the far right, you'll see his arm. 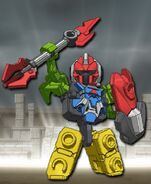